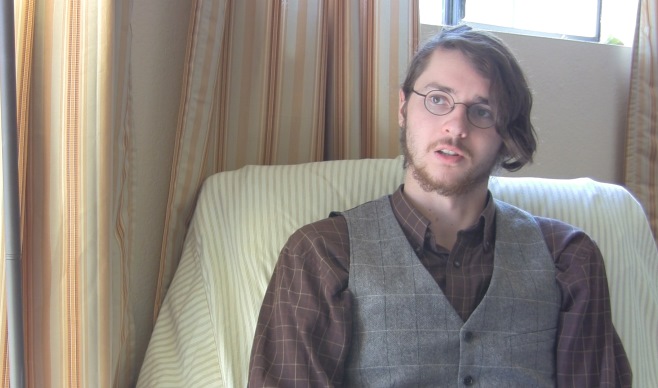 This was one of the most special interviews of the entire FutureFuel quest, and that is quite remarkable since this young climate activist is struck by a severe depression. Alec has been depressed for months and is temporarily living with his parents again, his mom e-mails the day before the interview. Maybe it’s because he started out with his mission at such a young age, or because of the world problems he is so worried about, but Alec Loorz suffers from a heavy identity crisis.

His mom’s story doesn’t come as a surprise to me, because as I wrote in an earlier blog post, watching Alec Loorz’s presentations on YouTube I saw him becoming more and more downcast with every speech he gave. He reached the ultimate low point in his presentation in which he broke down while talking about the woods near his university being torn down. For two years, he regularly retreated to this forest to spend some time alone, to escape from his status as world-famous climate activist. It is clear that Alec has been through a lot. At the age of twelve he started his mission to end global warming in his own lifetime. All over the world, he was hailed as ‘the young Al Gore’ and with his confronting speeches he mobilized millions of kids for the iMatter Marches. When he was sixteen, he and his movement filed a lawsuit against the American government in 49 states for their lacking climate policy. Now, just turned twenty, he is living with his parents and going through a dark period filled with self-doubt and sadness. He desperately tries to regain his understanding of the world and himself.

It proves quite a challenge to travel from Los Angeles to Ojai, where Alec lives. According to the Lonely Planet Ojai is a small new-agey town near Santa Barbara. First, I take the train from Los Angeles to Ventura, a city on the Californian coast with the most beautiful beach (and most fiercely shining sun) I’ve ever seen. Within a day I’m as red as a lobster, pieces of skin hanging from my face. After endlessly asking around in Ventura I find a bus stop with a bus that’s actually in service and seems to leave on schedule as well (according to most Americans there is no such thing as public transport, and if it exists, most people advise against using it). With my flowerprint bag full of cameras, change for my bus ticket, the name of the designated stop on a note and, of course, a stomach that’s somersaulting because I’m so nervous for the interview, I take that bus on the morning I’m supposed to meet Alec. To discover to my horror that everybody on the bus speaks Spanish, no English, and that nobody knows where my stop is. What’s worse, the bus only stops when you push the red button, but the names of the stops are nowhere indicated. With help of Google Maps and my super-expensive mobile internet credits (which I bought out of pure stress) I try to map the bus route to my destination as accurately as possible.

The American bus system is a symbol of the huge social inequality, Alec explains when I finally shake hands with him after my stressful bus ride. Only the people who don’t have money for a car take the bus or the train, and they are usually only the poorest people of the United States. He tells me that even in the 1920’s a large car manufacturer bought the entire train infrastructure around San Fransisco, only to be able to tear it down so that people would keep buying his cars. That can only happen in America, Alec sighs.

Alec Loorz, twenty years old, turns out to live in the communal church of Ojai, together with his mother and his little sister Olivia. His mom is one of the preachers of the church. After passing a cross that’s covered with children’s hand prints in paint we reach Alec’s room. You can spot it in the large lobby thanks to the Post-It note on the door, saying ‘Alec’s room’. The interior is basic: there’s a drum kit in the corner, and he has a bed, a desk and a couch near the window. His electric guitar leans against the couch. Later his mom will tell me that that morning Alec felt so down and tired that didn’t know how to get through the interview. To accommodate Alec, who has a disturbed day and night rhythm, we moved the interview to the afternoon, but while talking to him, I still see a heavily tired boy who is trying to push aside his intense sadness as soon as I ask him the first couple of questions. When he tells me about the things he’s going through right now, I sometimes hear his voice break. He can hardly get out of bed in the morning, he feels a heavy sadness lying over him as a thick blanket and he forgets to eat and take proper care of himself… He tells me that he decided to go through with this meeting because he thinks his contribution to my quest matters, but also because he hopes it will help to relieve his depression. 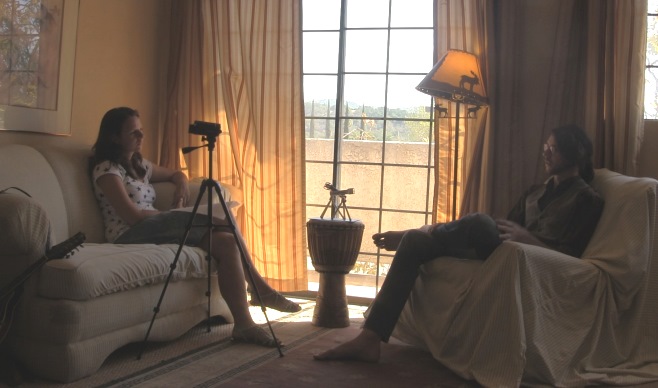 For over three hours we talk, discussing the major world issues. The longer we talk, the more I am impressed by the profound views of this young visionary. During the interview I slowly see the glitter returning in his eyes. I ask him about the development of his own visions and the quest for answers he undertook, and I ask him what he thinks of the views that came from my journey and which developments he sees. Despite his age, Alec turns out to be very sensitive and wise. These characteristics enable him to see through the world system as it were, and point out the flaws. And for the first time during my quest I don’t get answers like ‘What do you mean by that?’ or ‘I’ve never really thought about that…’, but ‘That is exactly what I’ve been thinking about for months!’ We discuss our views endlessly and I hear answers that have been in my head for months, but that I haven’t been able to voice. I feel I have found my like: someone who struggles with the same questions and who does everything in his power to get the answers. Like I do. Moreover, the reason I ever started this journey was my own burn-out/depression/what-is-my-role-on-this-planet-crisis, so I recognize many aspects of his story. Two sensitive nerds in one room.

The interview makes me think, and so does meeting his family. His mother, the director of his foundation Kids Vs. Global Warming, drives me back to Ventura. I see how much she suffers because of her son’s struggles with the world. She tells me about the past few years in which the family supported Alec like he was a professional athlete. He spoke all over the world and created many projects. ‘We really thought we would make a difference, could mean something in this world. We sacrificed a lot,’ she tells me. ‘We had little money, worked night and day because we believed in everything that Alec initiated.’ Now Alec is depressed, his younger sister Olivia is in therapy and the family is allowed to live in the church for a while because otherwise they wouldn’t make it financially. Meanwhile, global warming has been speeding up. ‘Was it all worth it?’ his mother sighs.

Was it all worth it? Those words stick in my head the next day. I can’t answer that question. But I wish for Alec that he learns to find a balance between ‘the big worldy work’ and his daily life, just like I did. That he learns the importance of creating a solid foundation of work, home and friends, but also of paying attention to the simple things in life that you cast aside so easily while you battle for a better world (and that seem so insignificant in that moment): enjoying a lovely meal, watering the plants before a busy day, doing the dishes, cutting tomatoes for an hour to make soup after an important presentation… these things keep me humble, grounded and present when I am in the rush of things. They put some perspective to the big global issues. I wish for Alec that he will find that foundation within himself. I can’t wait until he will succeed, so he will continue to move the world with all his unique visions.